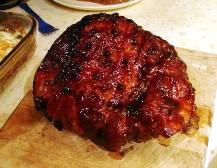 Ham is a versatile, often over-looked meat treat. It can be purchased in many forms; deli, pre-packaged, chopped, whole, half, bone-in, boneless and canned.

For More Information - How To Cook Ham

Baked Honey Ham
The ham will have a spicy sweet crust

To cook boneless ham, slice half way through at 1/4-inch intervals,then tie
with string. Place in roasting pan. Heat honey sauce and pour over ham to
marinate for 24 hours before baking. Then bake at 350 degrees for 1 hour or
until heated through. Glaze top under broiler, if desired.

In a small saucepan combine apple juice and cinnamon; bring to a boil.  Reduce heat and  simmer 15 minutes. Remove cinnamon stick.  In a skillet cook celery in butter until tender but not brown. Stir in apple juice, chopped apple, raisins, brown sugar and thyme. Cook and stir over medium heat for 3-5 minutes.

Combine cornstarch and water; stir into the apple mixture. Cook and stir about 2 minutes or until thickened and bubbly. Serve with ham with sweet potatoes and green beans.

With a skewer or fork, poke the ham all over in 1-inch intervals. Place in a shallow baking dish or small roasting pan. Pour the pineapple mixture over the ham. Add a little water to the pan to prevent pineapple from burning. cook at 350º for about 30 minutes or until ham is heated through and glazed.

Preheat oven to 325*F. Using a sharp knife score surface of ham crosswise and lengthwise, forming a crisscross pattern about 1/4-inch deep and 1-inch apart. Place ham, fat side up, in a roasting pan. Press enough brown sugar onto the surface of the ham to coat. Place 1 clove in the center of each crisscross. With toothpicks, place about 4 or 5 pineapple rings on the ham, between each crisscross. Use toothpicks to place a cherry in the center of each ring.

Pour the cola over ham, mixing with melted sugar in bottom of roasting pan. Add the reserved pineapple juice and the additional fruit juice or water to the pan.

Cover with foil. Bake about 16 minutes per pound of ham, or until the ham reaches an internal temperature of 140 degrees F. Baste with cola about every 30 minutes during cooking.

Remove from oven and allow to stand for at least 15 minutes before transferring to serving platter. Skim excess fat from pan juices and serve with the ham.

Courtesy of The Neelys / Food Network

Trim the ham of any excess fat, but leaving 1/4-inch of fat on the ham. With a sharp knife, score the fat on the top of the ham. Place the ham on a large rimmed baking sheet.

Whisk together the brown sugar, salt, black pepper, cumin, ginger, mustard powder, and cinnamon in a small bowl. Reserve 1 tablespoon of the dry rub mixture for the glaze. Season the ham with the remaining dry rub. Place plastic wrap over the ham and put it in the refrigerator for 8 to 12 hours. Allowing the seasoning to penetrate the ham overnight will give it a fuller flavor.

Preheat your charcoal grill to 300 degrees F for indirect heat.  Place the baking sheet with the ham on the grill grates, with the ham flat side down. Cover the grill and let the ham cook for 2 hours.

Heat the butter, thyme, honey, vinegar, and reserved dry rub together in a medium saucepan until the butter melts. Stir together until smooth. Brush the ham with the glaze, cover with grill lid, and grill for 30 minutes more, basting the ham every 10 minutes with the glaze. Remove to a platter, let rest for 30 minutes, then carve and serve.

Preheat the oven to 325º. Set the ham in a large roasting pan, fat side up. Using a sharp knife, score the fat all over in a crosshatch pattern. Pour 1 cup of the sherry over the ham and cover tightly with foil. Bake the ham for about 3 1/2 hours, or until heated through.

Uncover the ham and baste with the pan juices, then transfer to a large platter. Pour the pan juices into a medium saucepan. Return the ham to the roasting pan and raise the oven temperature to 375º. Bake ham for about 20 minutes longer or until it is browned and crisp, being careful not to burn (this is optional). Transfer the ham to a cutting board and let rest for minutes.

Meanwhile, using a sharp knife, peel the oranges; remove all the bitter white pith. Working over a bowl to catch the juices, cut the oranges between the membranes to release the sections; you should have 1/2 cup of juice. Add the orange sections, orange juice and the remaining 1/1/2 cup of Madeira to the juices in the saucepan. Cover and simmer over low heat for 10 minutes. Remove from the heat, add the zest and keep warm.

Arrange ham slices on a platter and serve with the orange sauce.

Heat the ham according to package directions following weight, time and internal temperature indications. Remove the ham from the oven, 30 minutes before it is done.

Score the outside with a sharp knife in a diamond pattern about 1/4 inch deep (pattern optional).

Combine the honey, brown sugar, bourbon, jalapeño, dry mustard and ground clove. Mix well and brush over the entire ham. Stick a whole clove in the center of each diamond.

Have your say about what you just read! Leave me a comment in the box below.
FacebookTwitterPinterestTumblrRedditWhatsApp