Stuffing Recipes for a Crowd___ 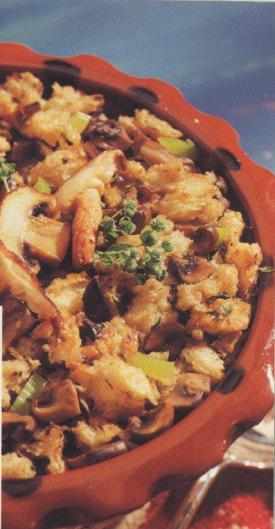 Probably the most beloved and memorable of all holiday side dishes. Stuffing is created from the simplest of ingredients but the taste is as comforting as home. It is one of those dishes where every family has its own special recipe.

The key to a fantastic stuffing is in the bread and the dryness of the bread. Fresh bread cubes that has been dried in the oven is far superior to bagged bread cubes or air dried bread (in my opinion).

For a light stuffing with a moist interior, choose a crusty, not to dense bread, such as a French baguette.

To moisten the bread, use homemade or low-sodium canned chicken stock. You can use a water or a blend of water and stock, but the stock will produce a much more flavorful stuffing.

These stuffing recipes for a crowd use white bread and cornbread, the basis for all stuffing. Included are variations on flavoring and ingredients.

Stuffing Recipes for a Crowd - Serving 50

Preheat oven to 325°F. Sauté onion and celery in butter until lightly browned. Add water or stock and salt, pepper and poultry seasonings. Cook until hot.

Remove from heat and add bread. Toss lightly until thoroughly mixed. Avoid over mixing to prevent soggy, compacted dressing. Stuffing should be moist but not wet. Transfer to greased pans. Bake for 45-60 minutes or until thoroughly heated. Do not overcook.

Mushroom: Reduce celery and by about 1 cup each. Sauté 2 pounds fresh mushrooms with the vegetables

Fruit and Nut: Add 1 pound raisins, dried cranberries, dried apricots or prunes or a combination and; 2 cups chopped pecans, walnuts or almonds to the bread and liquid mixture. Toast the nuts in a 325F oven for 5-10 minutes

Preheat oven to 375° F. Sauté onion and celery in butter until lightly browned. Add water or stock and salt, pepper and poultry seasoning. Cook until hot.

Stuffing should be moist but not wet. Transfer to greased pans. Bake for 25-35 minutes or until heated through. Do not overcook.

Bacon: Cook 1 pound of bacon in a large skillet until crisp. Drain well and crumble. Add to stuffing mixture. Reduce butter in recipe by 1-tablespoons and add about 4 tablespoons bacon fat to cook onions and celery

Chorizo, Cherry and Pecan Cornbread Stuffing
Serves 8
Stuffing can be assembled 1 day ahead. Cover and chill.

Preheat oven to 400°. Butter a shallow 3-qt. baking dish and a sheet of foil. Bring vinegar and 2 Tbsp. water to a boil in a small saucepan; remove from heat and add cherries. Let sit until cherries are plump, 15–20 minutes.

Meanwhile, spread out cornbread on a rimmed baking sheet and toast until golden brown, 10–15 minutes. Let cool. Place in a very large bowl.  Drain cherries, reserving soaking liquid, and add cherries to bowl with cornbread (do not mix).

Reduce oven temperature to 350°. Toast pecans on a clean rimmed baking sheet, tossing once, until fragrant, 8–10 minutes. Add to bowl.

Meanwhile, heat oil in a large skillet over medium-high. Cook chorizo, stirring occasionally and breaking into small pieces with a spoon, until browned and cooked through, 8–10 minutes. Transfer to bowl with a slotted spoon.  Add onions and celery to skillet, season with salt and pepper, and cook, stirring often, until onions are golden brown and soft, 10–12 minutes. Add garlic and sage; cook, stirring, until fragrant, about 2 minutes. Transfer to bowl.

Whisk eggs and 2 cups stock in a medium bowl; pour over cornbread mixture. Add parsley, season with salt and pepper, and gently toss, adding more stock ¼-cupful at a time as needed (you may not use it all), until combined and cornbread is hydrated. Mix carefully to avoid breaking cornbread into crumbs. Transfer to prepared dish and dot with remaining ¼ cup butter.

Cover with buttered foil; bake until a paring knife inserted into the center comes out hot, 30–35 minutes. Increase oven temperature to 450°. Uncover and bake until top is golden brown and crisp, 20–25 minutes. Let sit 10 minutes before serving.

Recipe thanks to Bon Appetit

Stock or Soup Base
Stock or soup base is a concentration of cooked meat, poultry, seafood or vegetables, plus cooking juices and seasonings. It generally comes in a puree or paste-like form. Most are highly salted. Reduce or omit salt from the recipe when using the base.

For all stuffing use 3 ounces of poultry base added to the 1 gallon of water.

Have your say about what you just read! Leave me a comment in the box below.


Go to top of Stuffing Recipes for a Crowd